I am posting on the Art Impressions blog today!
I am shakin' things up a little today, with the Mooove It Mini Shaker (Sku #4797): 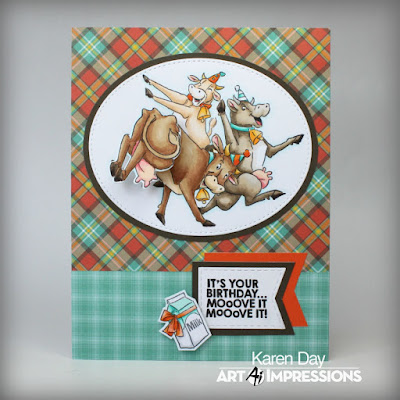 You're probably singing the song now, aren't you?  There's just something about dancing cows...  I coloured them up with my Copic markers, and you'll notice that the hind quarters on the front cow also come as a separate stamp.  After colouring his derriere, I used the die cut included in the set to cut it out, and used a Mini Action Wobble to pop it up - giving him a wonderful shimmy when you flick it!  You can see where the Wobble is a bit better here: 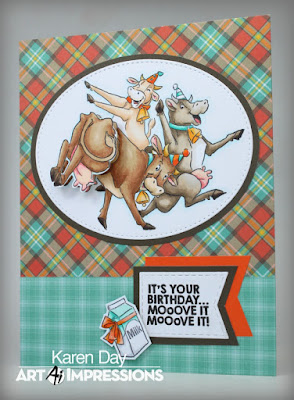 There are three cute sentiments in the set, so I cut one of them out in a pennant shape, and added the little milk carton on pop dots as well.  I made a second card with a few paper changes, a different sentiment and some zigzag stitching: 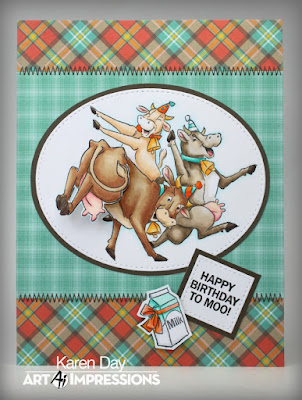 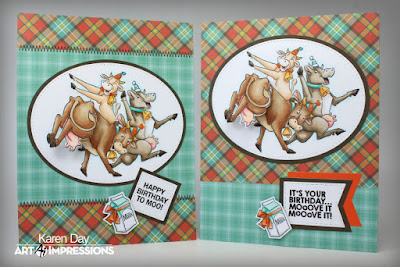 InLinkz.com
Posted by Karen Day at 5:00 AM

Oh my gosh, Karen - these are AWESOME!!! lol...they make me smile! xoxoxo

This group of party cows really made me smile, Karen! Great colors and I love the milk carton.