I am posting on the One Crazy Stamper blog today.  I have a very fun card to share - using one of the new Art Impressions Spinners from their 2015 release.  This little fairy is my absolute favourite out of all the new Ai product!  I've made a spinning easel card to show her off, here is Fairy (Sku #4576): 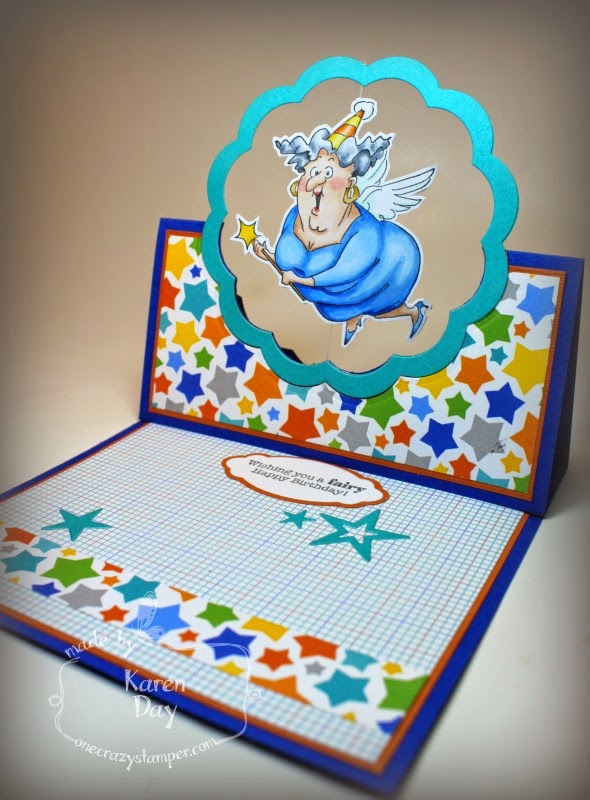 The Spinners are literally designed to spin!  The set comes with both a front and back image, and a sentiment.  I have sandwiched a piece of thread between the front and back when I glued her together, and then I've suspended the string between my die cut frame.  Here's a close up where you can see the thread: 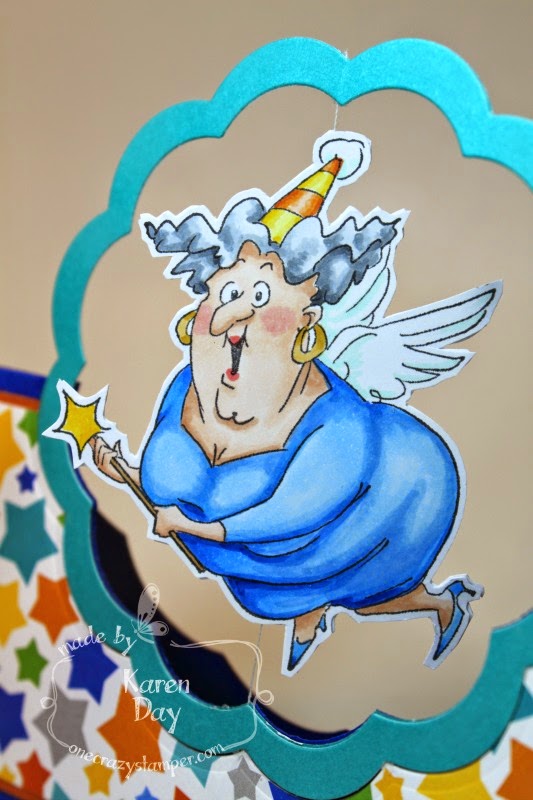 After colouring the fairy, I used pieces of washi tape to secure two Spellbinder's dies together, and then cut them out twice in the turquiose cardstock to form my frame: 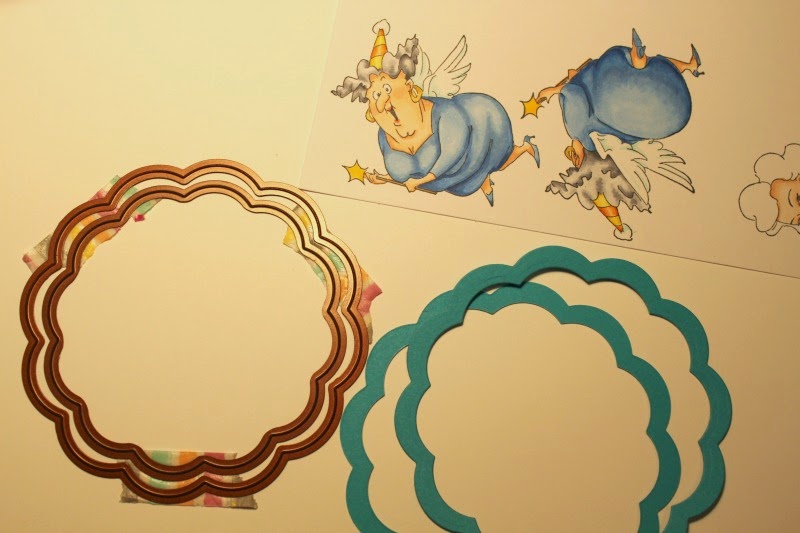 After fussy cutting the fairy, I drew a light pencil line on the wrong side of her, and ran a line of glue down it to adhere the piece of thread.  Then I glued the fairy together, and sandwiched the top and bottom ends of the thread between the frame pieces. 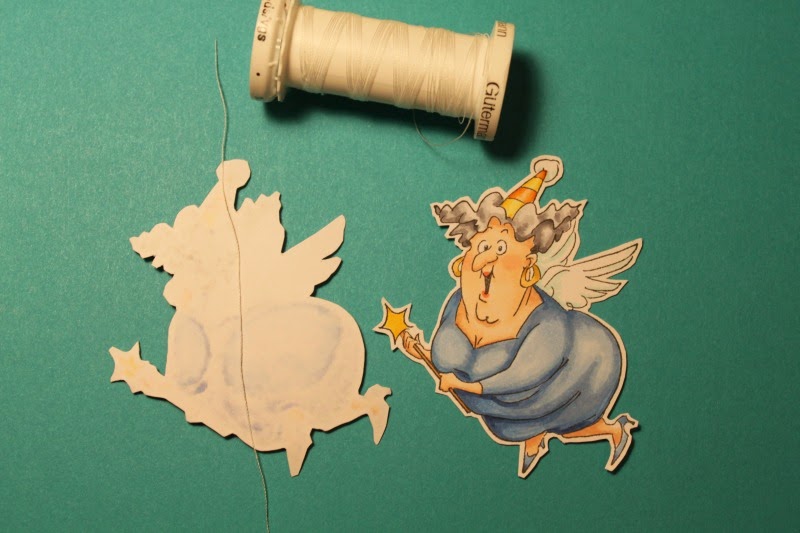 My card base is 5 1/2" x 11".  You can see below that I glued two matted pieces of star print paper onto the card front.  I scored a line across the front between the two panels - this is where the card will fold up to the easel shape.  I positioned the smaller of the two dies (the photo shows both, but I removed the larger die before cutting!) in the middle of the front and ran it through my Cuttlebug.  Then I glued the bottom half (only!!) of the turquiose frame on top of the opening, so that when the front is bent upwards, the fairy would be suspended in the frame. 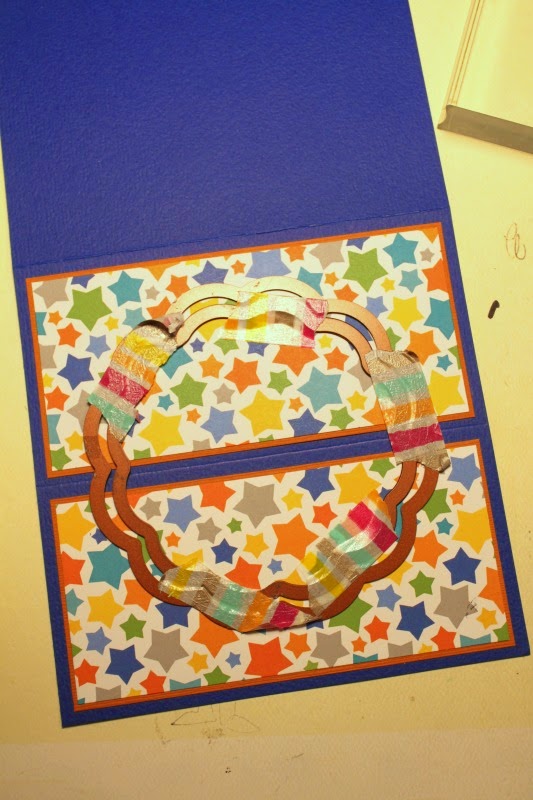 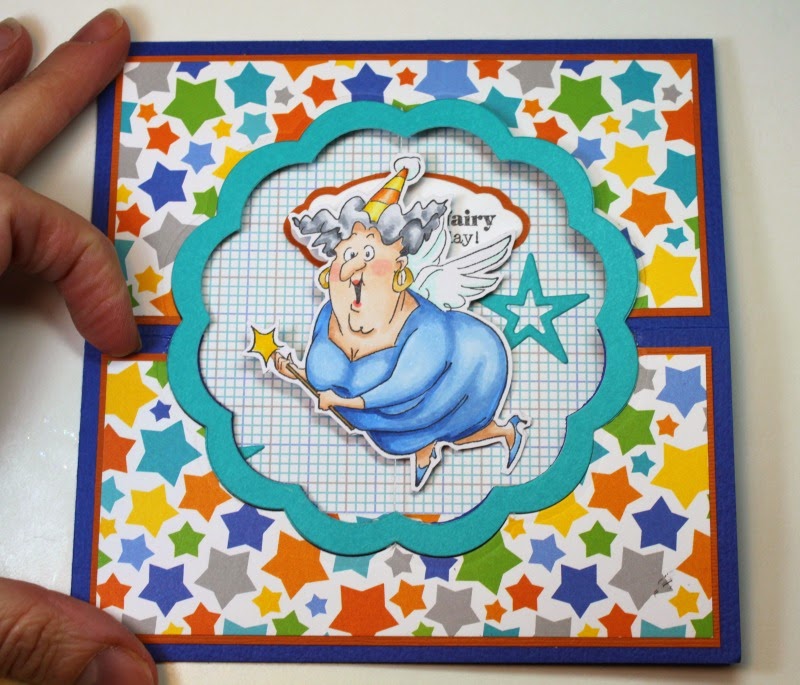 And finally a few more shots so that you get the idea - you won't believe how difficult this card is to photograph, as she literally spins all the time.  I set her spinning, then quickly shoot a bunch of photos until I get her facing forward - it's quite funny :o) 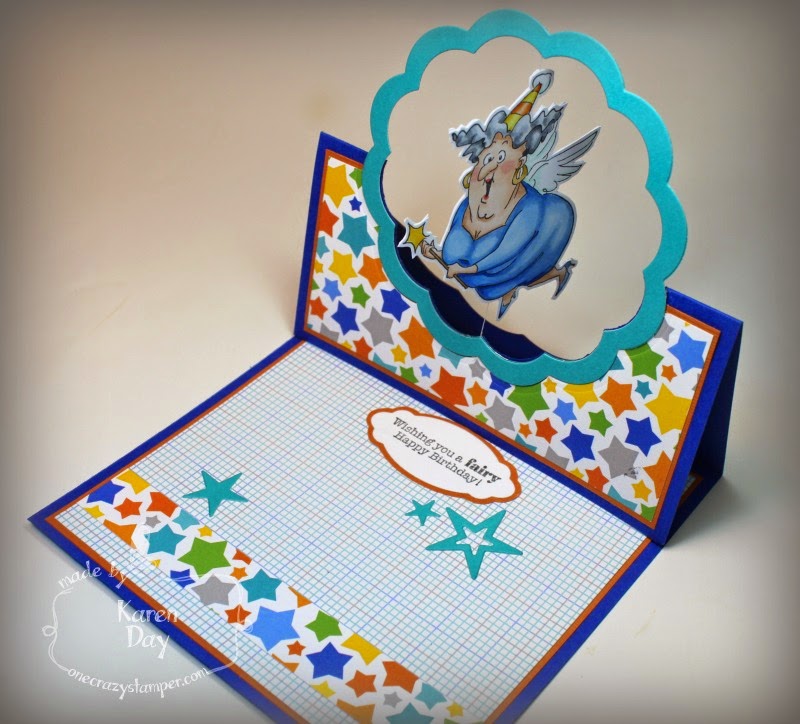 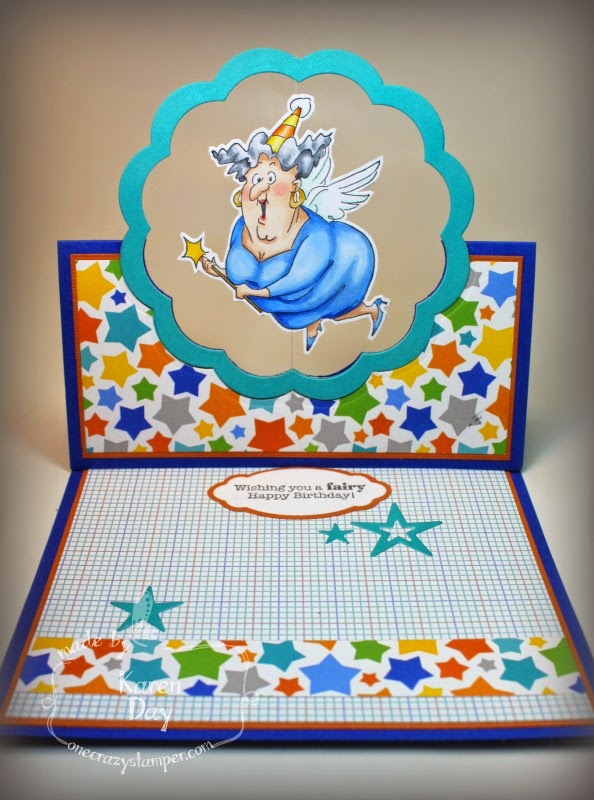 Karen, your card is amazing. Love the spinning detail.

Awesome card!! I love the fairy too!! And you colored her beautifully and show her off so well with your card!!

I love your frame around her and the stars are perfect! Awesome card!

Super cute ! Love this "fairy"! Such a great design and wonderful colors!!!

I love how you made this card! I don't have the fairy but I have the spinning couple. I need to make anniversary cards... Going to borrow your idea. Will post a photo if they turn out...

Karen Day
Richmond Hill, Ontario, Canada
I am an avid card maker & knitter, a former clothing designer, and I work part-time in our city library. Leave a comment, I'd love to hear from you!